The Rivers We Fish

Trinity River is located 1 hour east of Eureka, California. My season on the Trinity begins in September and continues through to November. For the fair-weather fisherman these trips are perfect. The temperatures are usually between 60 and 80 degrees fahrenheit with very little rainfall during this time of year. The Trinity has carved its way through some of the most rugged terrain in California, which adds plenty of scenery and a little whitewater excitement to the fishing trip. The Trinity runs so clear you can see the fish as we drift down the river. This river is also unique because you can target both salmon and steelhead all in the same day. The Trinity has given us some of our best days of fishing; hook ups in the double digits is not uncommon on a day trip. Salmon average 15 pounds with the ocassional 30 – 40 pounder being caught. Steelhead average about 8 pounds.

The Smith River is a wild river; meaning there is no water diversion or dams to alter its flow. Its pristine water flows over granite boulders and winds through redwood groves. It has produced the state’s record steelhead weighing 27 pounds, 4 ounces. Salmon in the 50 pound range are caught annualy. Salmon fishing on the Smith starts with the first big rain in the fall; usually in late October or early November. The rain triggers the fish to start their journey up river. As the fish migrate up river we intercept them by back bouncing bait or pulling plugs. This season lasts until December. Steelhead season on the Smith begins in late December when they begin to enter the system in large numbers. We target these fish by side drifting bait. Steelhead fishing on the Smith continues into April.

On the Eel River we target mainly steelhead. This fishery starts in December and lasts until April. Due to the high sediment content any significant amount of rain can turn this river from emerald green to chocolate milk overnight. It may be weeks before the river becomes fishable and when it does it may only last for few days before it blows out again. The natives of the Eel River valley called the river “Weott Lolla,” which means “many eels” or “river of plenty.” When conditions are ideal this name proves to be true. When we do get a chance to fish the Eel it’s a real treat; fishing pressure is generally low and the scenery is outstanding. Keep in mind this river is catch and release only. 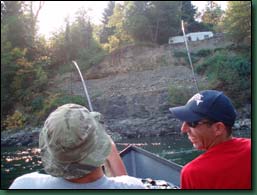 A double hook-up on the Trinity 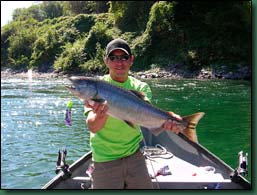 A kwik fish from the Trinity 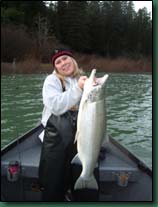 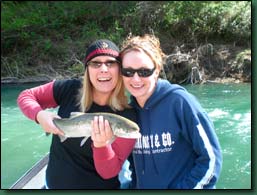 Jill and Ana with a wee steelie from the Eel River